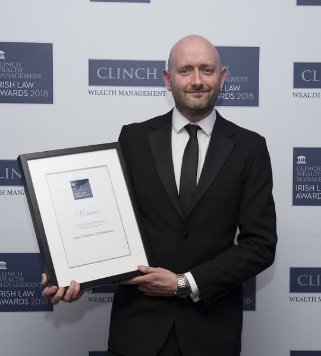 After qualifying as a solicitor in Ireland in 2007,  Jason practised for a number of years as an Associate Solicitor, specialising in Employment Law, Company Law, Commercial and Civil Litigation.

Combining his skill and passion for law and politics, he then paved out a successful career in Public Affairs, before opening up his own law practice J.O.S Solicitors. During his time in Public Affairs, he worked both in the corporate and the not-for-profit sector, gaining unique experience and knowledge of these diverse environments from the legal, regulatory and policy perspectives. He also gained exceptional experience and insight into the strategic areas of Employee Engagement and Crisis Management, which complimented his legal knowledge and acumen.

Jason is also a qualified Solicitor in England and Wales, since 2010 and is an accredited Mediator of the Mediators Institute of Ireland (MII). He is also founder of Mediation Firm, which provides Mediation services nationwide and internationally as a form of dispute resolution with particular focus on civil, commercial and workplace disputes.

Throughout his career, Jason identified the need to offer clients a more customised service offering and specialised legal focus, delivered in a more personable and pragmatic fashion. It was these motivating factors, which led to the establishment of this specialist law firm and it is on these values, that the firm achieve its results.

Jason also regularly contributes to media interviews and debates on various legal and policy topics. He has had numerous articles and opinion pieces published in the national and regional press, and in particular with The Irish Independent and The Journal.ie. He has also been made appearances on national TV and in particular RTE’s News One ,  Six One News and RTE’s Campaign Daily, including guest appearances on various national and regional radio shows, such as RTE’s Morning Ireland and Newstalk.