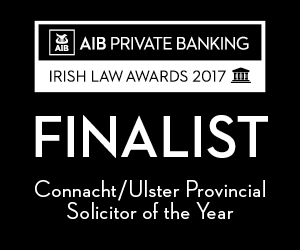 J.O.S Solicitors are proud to announce that its founder Jason O’ Sullivan, Solicitor and Public Affairs Consultant with the firm has been nominated and shortlisted as Finalist for the AIB Law Awards 2017, in the prestigious category Connacht/Ulster Provincial Solicitor of the Year.

According to the organisers-

The 2017 AIB Private Banking Awards will be held on Friday 12 May, at the Clayton Hotel Burlington Road. Hosted by RTE’s Miriam O’Callaghan, the 2017 Awards is a must attend event for all involved in the Irish Legal Sector.“